The stone the Venus of Willendorf is made of: the puzzle of the 29,500-year-old figurine’s origin may be solved

The Venus of Willendorf counts among the most significant artefacts in human history. For more than a hundred years, scientists have puzzled over the figurine’s meaning as a cult object, often interpreted as a symbol of fertility. Similarly, little was known about the origin of the raw material used to make the Venus. The figurine is made of oolite, a very special limestone not found in the Willendorf area. Now, using high-resolution tomography scans, a research team around anthropologist Prof. Dr. Gerhard Weber of the University of Vienna, as well as geologists Dr. Alexander Lukeneder and Dr. Mathias Harzhauser and prehistorian Dr. Walpurga Antl-Weiser of the Natural History Museum Vienna, has discovered that the material for the Venus figurine came from a long way away.
The figurine, which stands at 11 cm high, was found in 1908 during a dig of the Natural History Museum Vienna near Willendorf in the Wachau region. It depicts a faceless, adult woman with pronounced breasts, wide hips, and an elaborate hairstyle or headdress. Countless interpretations have been proposed for the iconic figurine’s meaning and use. In contrast, it has long been clear that the figurine was carved from oolite, a stone consisting of tiny limestone grains (ooids) formed in the flat waters of tropical seas. The unusual choice of material makes the Venus of Willendorf the only one of its kind in the world. At the same time, it begs the question of where the raw material could have come from, since oolitic limestone is not found in the Wachau region of Lower Austria. Previously, examination had necessarily been limited to the figurine’s surface, which did not help scientists in their search for an answer. Now, for the first time, the figurine has been scanned using micro-computed tomography at the University of Vienna. Through several scans, lead researcher Prof. Dr. Gerhard Weber was able to obtain images with a resolution down to 11.5 µm, comparable to sections you would study under a microscope. They revealed that the figurine’s internal structure is far from homogenous, which made it easier to determine its origin.

Subsequent research was conducted by geologists Dr. Alexander Lukeneder and Dr. Mathias Harzhauser of the Natural History Museum Vienna. They systematically searched for oolite deposits in Europe and obtained samples for comparison, covering an area stretching from France to Ukraine, and from Germany to Sicily. The team received support from the State of Lower Austria, which provided funds for the time-consuming analyses. “Due to the different grain sizes of the limestone ooids and variations in fossil content, each specimen is unique,” says geologist Dr. Alexander Lukeneder. Statistical analysis of numerous specimens yielded an unexpectedly close match. The stone used for the figurine most likely originated in a deposit in Northern Italy.

Statistically speaking, the six slices sampled from the Venus figurine are indistinguishable from specimens found at a site near Lake Garda. This means that the figurine (or its material) made the journey from south of the Alps all the way to the Danube north of the Alps. “What you have to picture is that the Gravettian people (the toolmaking culture of the period) searched for and populated favourable habitats. Once the climate or hunting opportunities changed, they moved on, preferably along rivers,” explains Prof. Dr. Gerhard Weber of the University of Vienna.

But in science, things are rarely settled once and for all. Besides Italy, a deposit in the Donetsk Basin in Ukraine is also a likely candidate. While the composition of the Ukrainian oolites does not match that of the Venus figurine as closely as the Italian samples do, female figurines that bear a striking resemblance to the Venus of Willendorf have been found in Ukraine and in Russia, as have similar types of tools. Obsidian artefacts from Eastern Slovakia found in Lower Austrian excavations also attest to contacts between the Wachau region and the East at the time. In both cases, the results indicate that early modern humans maintained complex networks of communication just before the Last Glacial Maximum.

A particularly fascinating part of the research was the discovery of tiny shell fragments within the Venus figurine, and their digital 3D reconstruction. Comparison with specimens in the fossil collections of the Natural History Museum Vienna made it possible to identify the shells, and thus date the oolite more precisely. The stone of the Venus figurine was formed some 150 million years ago, when giant dinosaurs still roamed the Earth. “That we would be able to draw a line from the iconic Ice Age figurine to the tropical seas of the Mesozoic was a surprise to us all,” remarks Dr. Mathias Harzhauser, who heads the Department of Geology & Palaeontology at NHM Vienna. 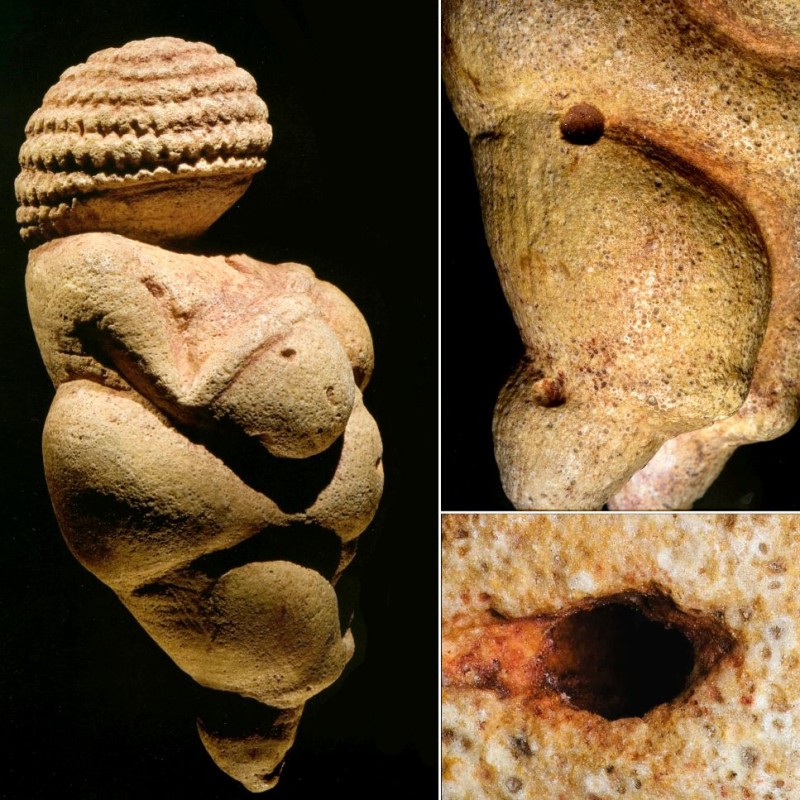 The Venus of Willendorf. The origin of the holes on the surface could now be explained. They originate from lumps of iron oxide that have broken out. 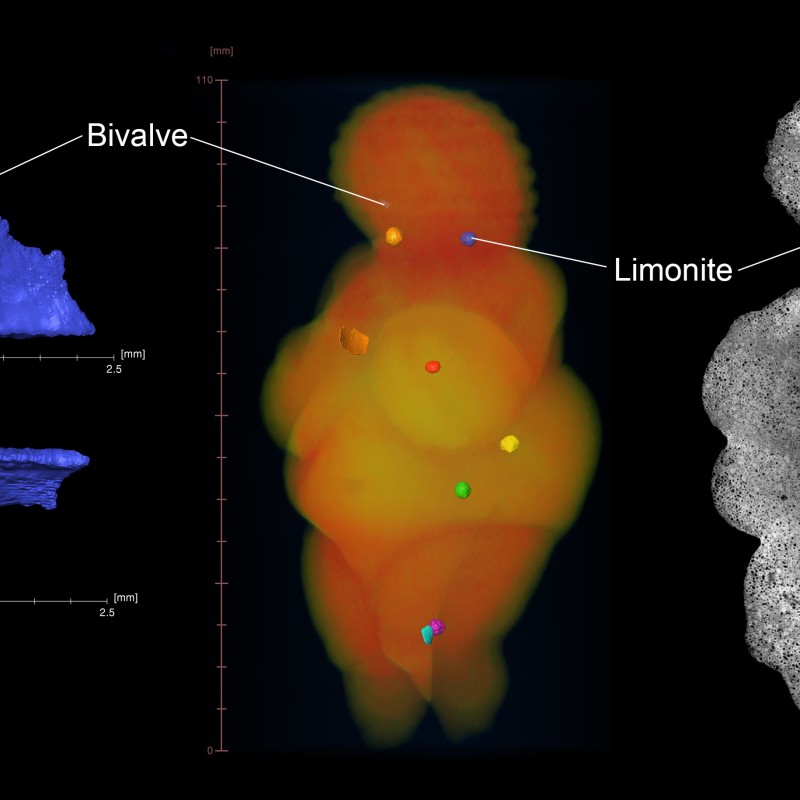 Micro-CT images of the Venus of Willendorf. For the first time, the structure of limonite concretions becomes visible (right). Small iron oxide lumps in the statuette characterise the Venus stone (centre). The tiny mussel shell inside the figurine (left) made it possible to determine its age. 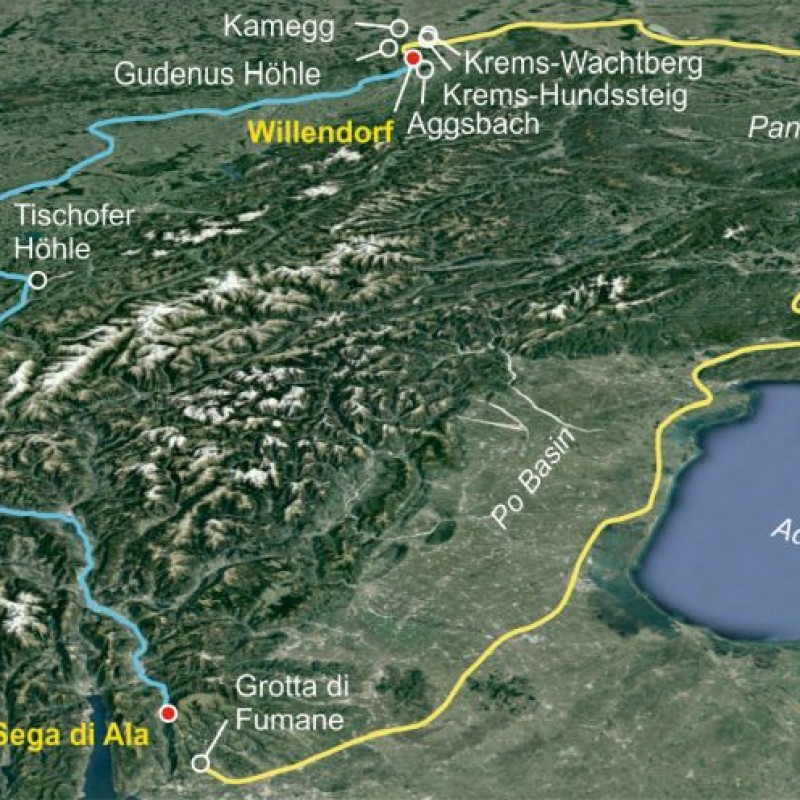 Two possible migration routes that the Venus could have taken. 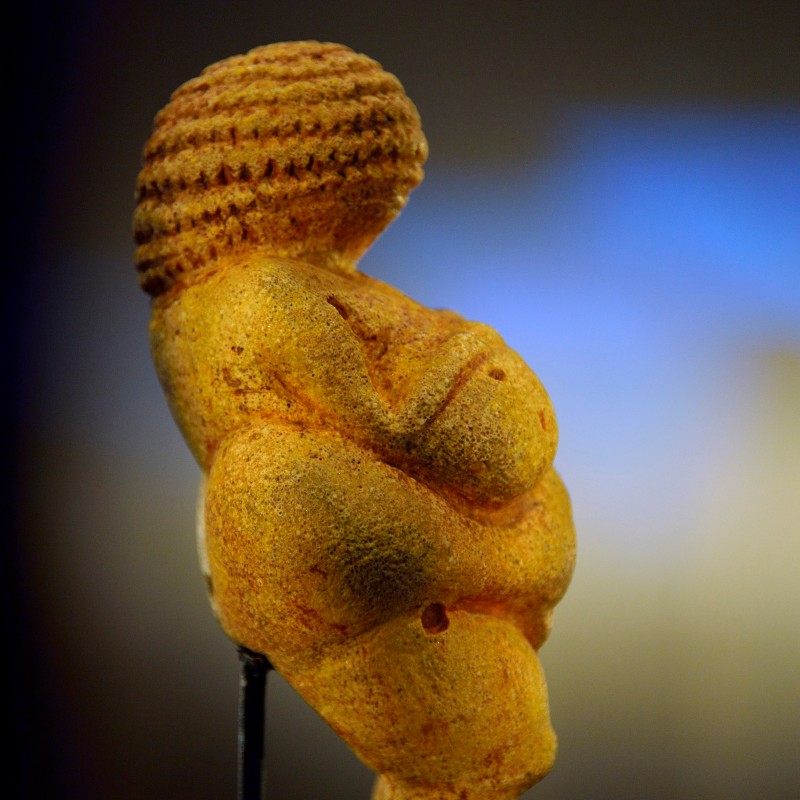 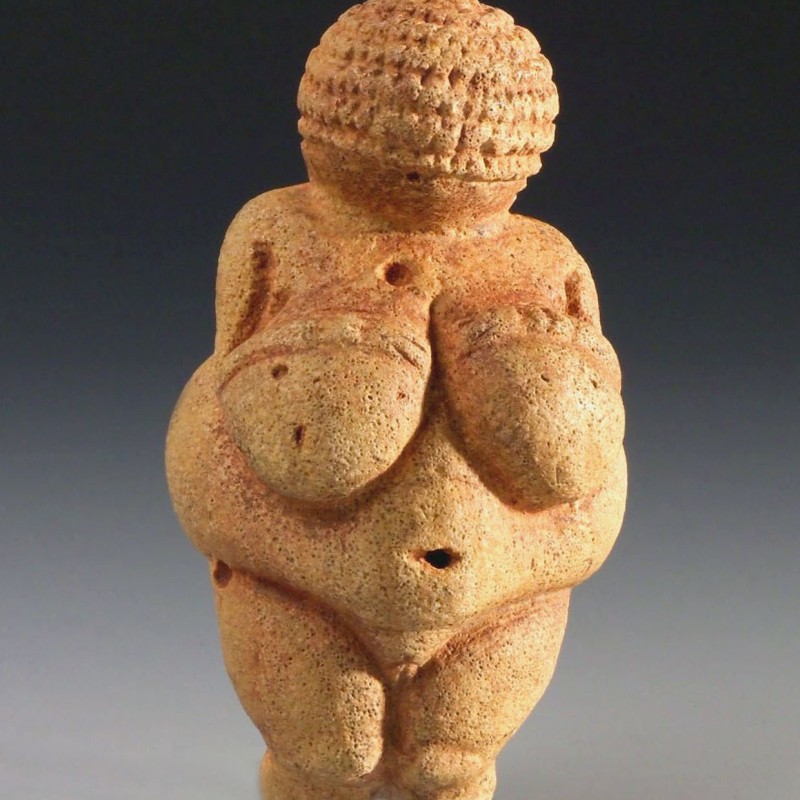