The ninth impact crater of a meteorite in Brazil has just been discovered in the context of a joint research activity. Dr Ludovic Ferrière, curator of the meteorite collection at the Natural History Museum (NHM) Vienna, found clear evidence in the form of shocked quartz.
In this context the term ‘impact’ refers to the collision of two celestial bodies at very high speed. Numerous impacts of small bodies such as asteroids and comets have been documented on Earth, the Moon and other celestial bodies. On land, the result of such an event is called impact crater. The craters formed a long time ago and are more common on Earth than one might think – they are just a great deal more difficult to locate than the craters on the surface of the Moon.

The Viennese meteorite expert Ludovic Ferrière was part of an international team of researchers who have now reported the discovery of a crater with a diameter of 7 km. The crater, which was named Nova Colinas, is located in the state of Maranhão in north-eastern Brazil.

Out of the approximately 200 impact craters known on Earth today, this is the ninth crater found in Brazil and the eleventh in South America.
The research team, which is composed of Brazilian, Austrian, German, French and Australian scientists, conducted comprehensive investigations which resulted in the discovery of shocked quartz, thereby furnishing robust proof of the fact that the Nova Colinas crater was formed by meteorite impact.

The discovery of new craters on Earth helps us better understand the history of our planet and the physics of these huge impacts. Not all of them have consequences as momentous as the impact that caused the extinction of the dinosaurs 66 million years ago, but at the very least they represent a destructive event on a regional scale.

“Further intensive research will have to be conducted on this newly confirmed impact structure in order to determine when it was formed,” notes Ludovic Ferrière, “but the crater is definitely several tens of millions of years old.”

Austria has a centuries-old tradition of meteorite research, and the NHM Vienna is home to the world's oldest meteorite collection. The collection's first meteorite struck Earth on 26 May 1751 in Hraschina near Zagreb at a time when scholars still refused to believe that stones could “fall from the sky”. A piece of iron weighing 39-kg iron was first taken to the Imperial Treasury in 1751 and then transferred to the Natural History Cabinet (k. k. Naturalienkabinett) in 1778, where it provided not only the foundation for the world's oldest meteorite collection, but also an incentive for collecting more “sky stones” decades before the existence of meteorites was officially recognised in science circles.

The Director General and Scientific Director of the NHM Vienna, Dr Katrin Vohland, is delighted about this latest Austro-Brazilian research cooperation. “Ever since the expeditions from 1817 to 1821, the NHM has enjoyed close ties with Brazil. As a result of these and numerous other expeditions and joint research activities, our museum holds a large number of important natural history objects and drawings. These collection holdings and the research devoted to them have ensured close and fruitful contacts to this day”.

This historical and very direct connection between the two countries and the 200th anniversary of Brazil’s independence from Portugal in 2022 inspired the NHM to showcase the relations between the Natural History Museum Vienna and Brazil, as well as the unique diversity of the Brazilian biosphere, in a special exhibition. “Brazil. 200 Years of Relations” is set to run until 23 April 2023.

Current collaborative activities between the NHM Vienna and Brazilian institutions are not exclusively devoted to research into the diversity of plant, animal and rock species, but also concern research into lifestyles, environment, social structures and diseases of the indigenous people who inhabited the country thousands of years before it was colonised by the Europeans.
Signed on 10 August 2021 between the Brazilian Ministry of Science and the NHM Vienna, the Memorandum of Understanding on Scientific Cooperation has been filled with life. It specifies the common goals in support of science:Scientific paper:
Reimold W.U., Ferrière L., Crósta A.P., Vasconcelos M.A.R., Gottwald M., da Silva Borges M., Almeida T.I.R., Pereira F.L., Goés A. M., Jessell M., and Baratoux D. 2022. Nova Colinas, Maranhão State: A new complex impact structure confirmed in Brazil. Meteoritics and Planetary Science, https://doi.org/10.1111/maps.13833.

The article can be found online:
https://onlinelibrary.wiley.com/doi/abs/10.1111/maps.13833
Download all images 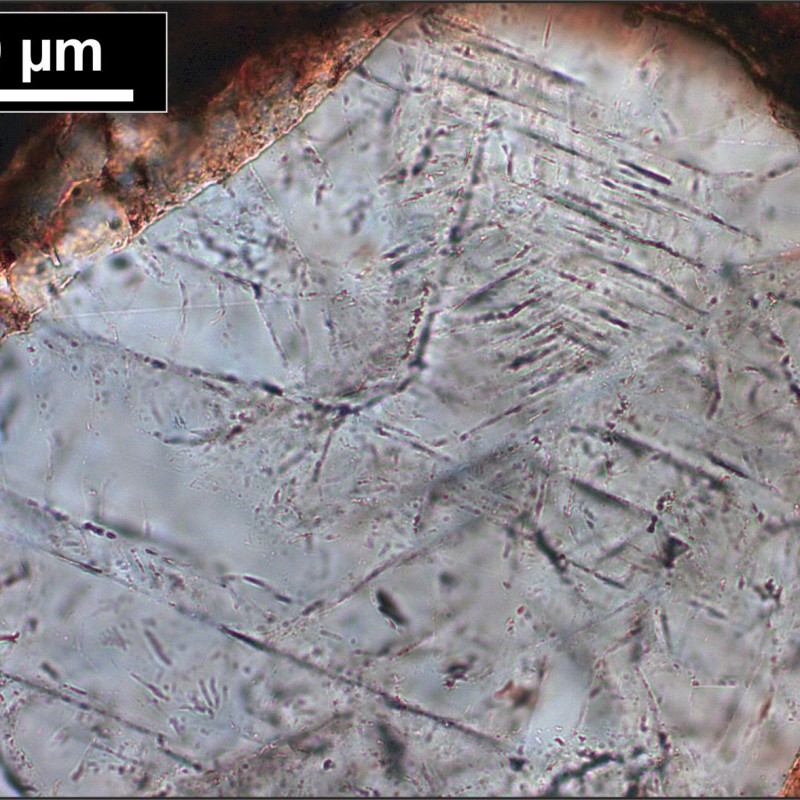 Microphotograph of a shocked quartz grain found in a rock sample from the Nova Colinas crater.
© NHM Wien, Ludovic Ferrière
Follow us on