Comets are icy messengers from the outer reaches of our solar system. Comprised mainly of ice and a little dust, the ice is vaporized and ionized by the Sun as they enter the inner solar system, resulting in the typical comet tail.

The idea of sending a space probe and a lander to a comet was first developed 32 years ago. Back then the idea was to remain on the comet for an extended period of time and observe how the comet becomes increasingly active on its orbit around the sun, firing gas and dust into space.

“There had not been enough research on these typical comet processes. There was a lot we still did not understand,” explains Dr. Ekkehard Kührt, a planet researcher at the DLR and responsible for the DLR’s scientific contribution to the Rosetta and Philae missions. “Comets are also great ways to look back in time and understand how the planets were created. They have kept many of their original properties. These can help us understand what went on back then.”

Therefore, the European Space Agency (ESA) set about creating a mission to send the first probe into space to orbit a comet on its journey through the solar system. Meanwhile, a consortium led by the DLR developed a pioneering high-tech lander to carry out scientific analysis on the surface of the comet. The probe and lander were given the names Rosetta (taken from the Rosetta Stone, which laid the foundations for deciphering Egyptian hieroglyphs) and Philae (taken from an obelisk at the Temple of Philae whose bilingual inscriptions helped Jean-François Champollion make his major breakthrough in the eventual decipherment of Egyptian hieroglyphs in 1822).

A total of 21 instruments were flown on board Rosetta and Philae to comet Churyumov-Gerasimenko. The international teams of scientists wanted to find out what the comet was made up of, which physical properties it had, and whether, in fact, comets were responsible for bringing water and the foundations of life to Earth. “How life developed on our planet is one of the key elements of our research,” says Professor Tilman Spohn, the former director of the DLR Institute of Planetary Research. “Rosetta showed us that while comets may have brought prebiotic molecules to our planet, they were definitely not the main source of water on Earth.” The MIDAS experiment into comet dust was led by an Austrian team (from the Space Research Institute at the Austrian Academy of Sciences). Prof. Dr. Christian Köberl, Director General of the NHM Vienna, is a member of this research team. Exhibits taken from this experiment will be shown in the museum in cooperation with the Austrian Academy of Sciences.

A comet in the center of Vienna

The international mission began on 2 March 2004. The journey through space, including close flybys of Earth and Mars in order to pick up momentum, took a total of ten years before the probe and lander finally reached comet 67P/Churyumov-Gerasimenko on 6 August 2014. Just a few months later, on 12 November 2014, Philae became the first lander to touch down on a comet. The exhibition documents the whole incredible mission. Highlights include a 1:5 model of the Rosetta space probe and a life-size model of the Philae lander. A 4.3 m by 3.6 m model (1:1000) of the Churyumov-Gerasimenko comet is shown on top of a map of Vienna in order to give visitors a sense of size.
Download all images 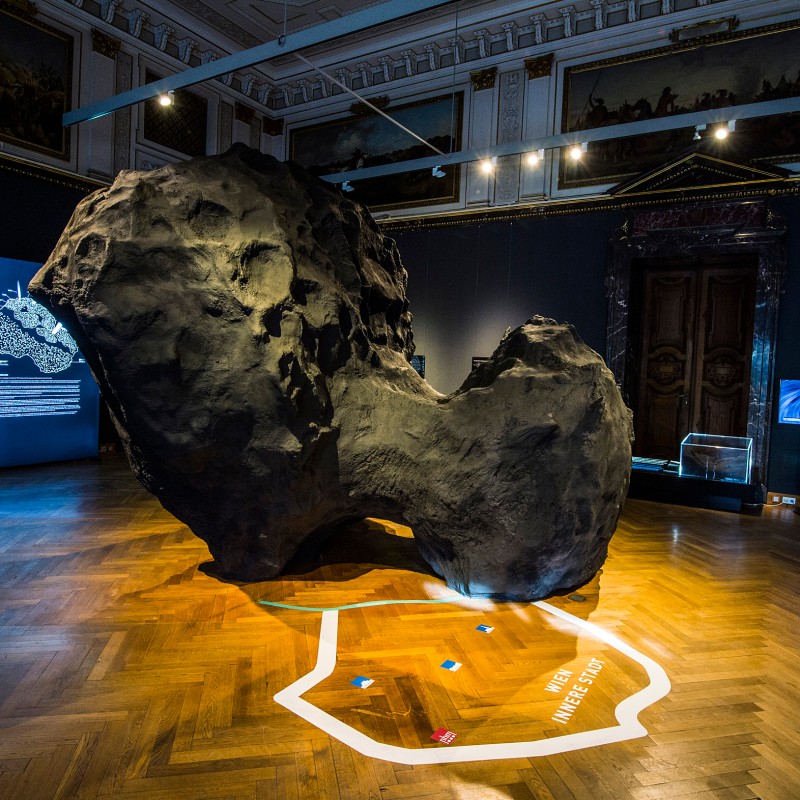 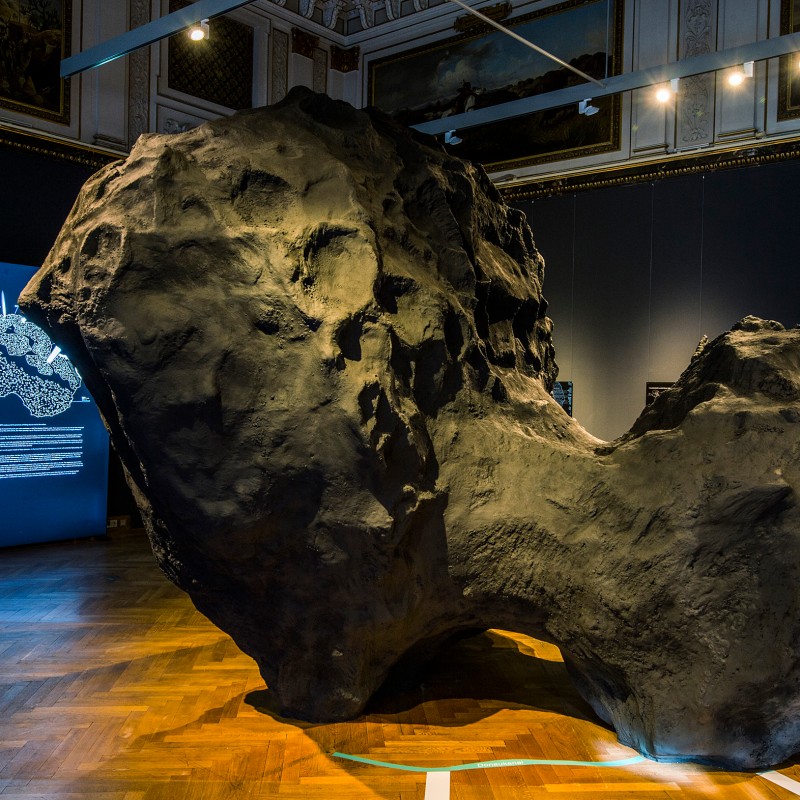 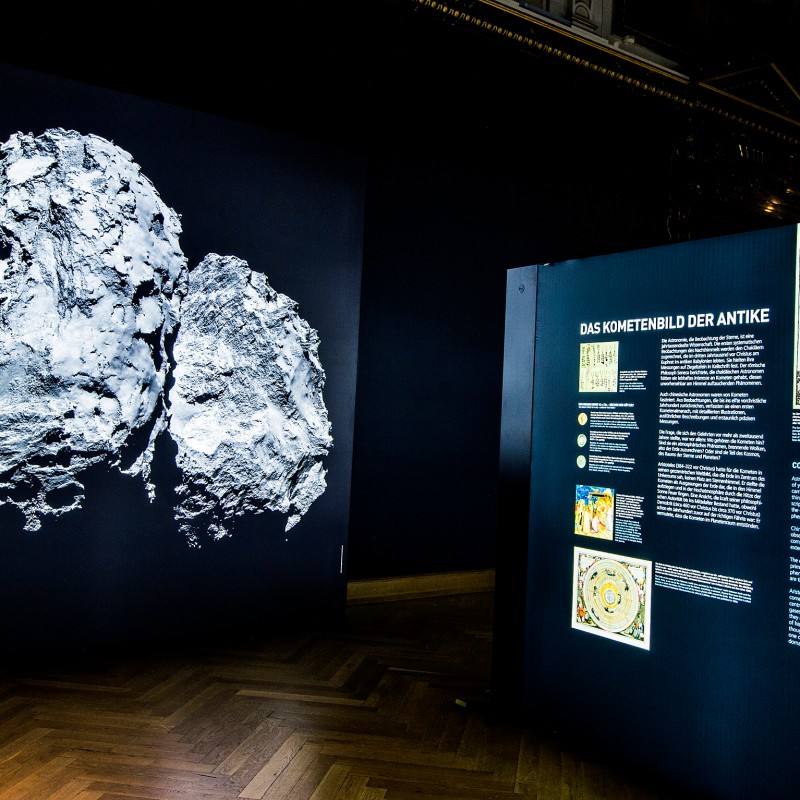 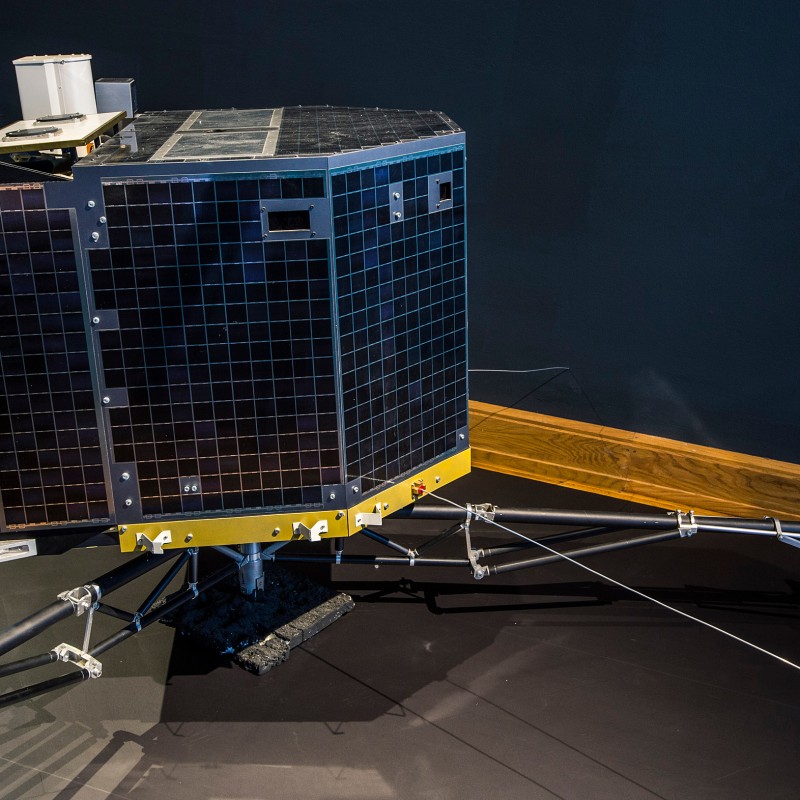 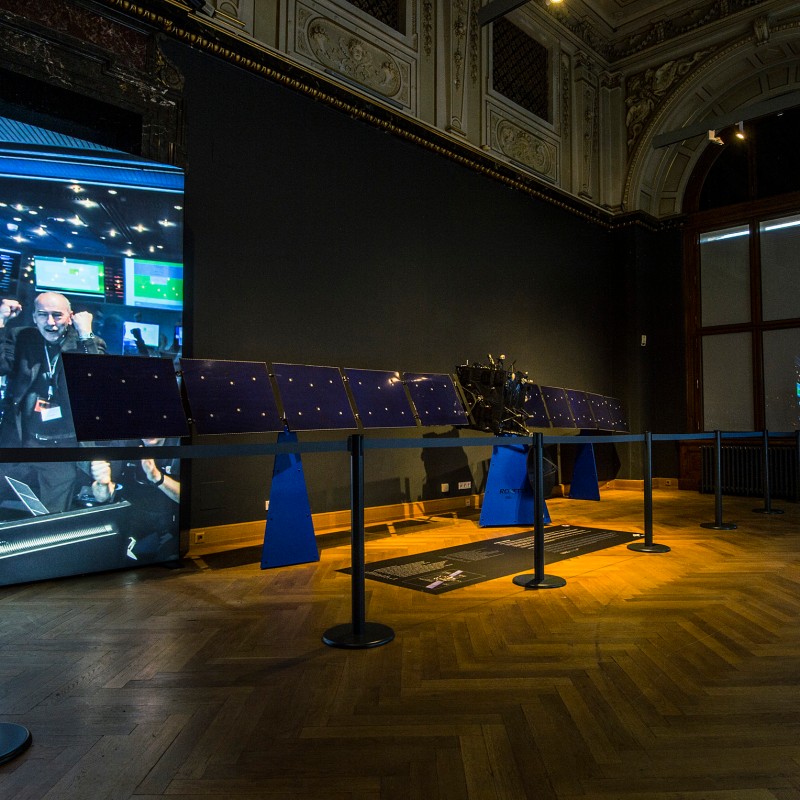 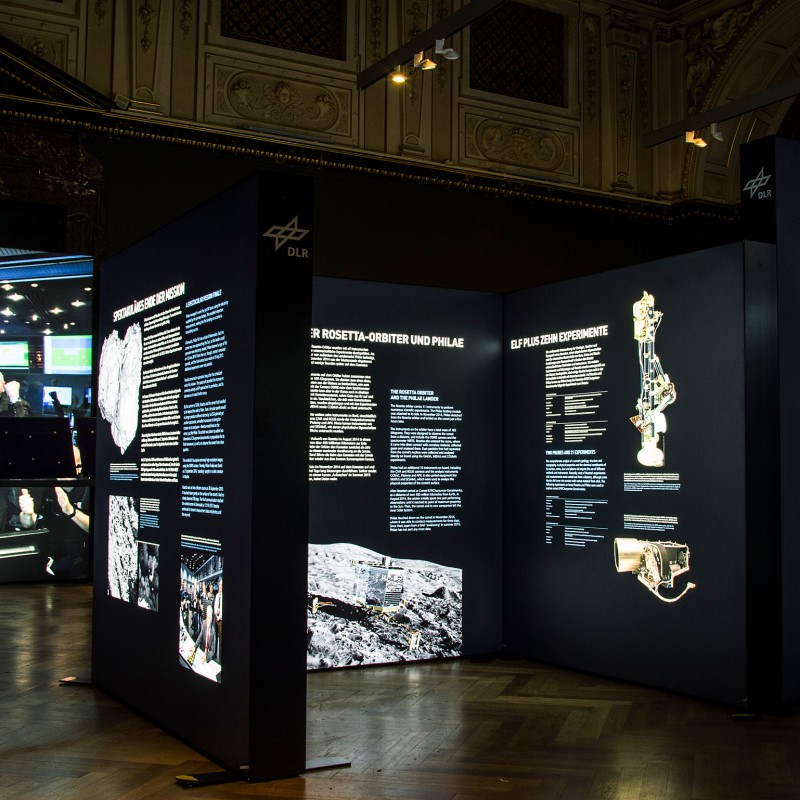 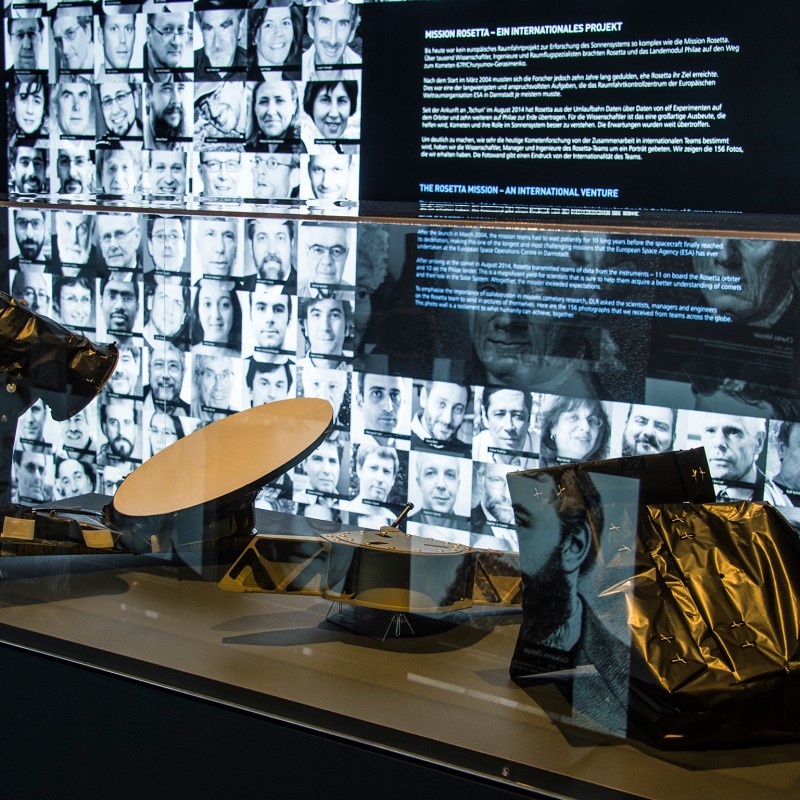 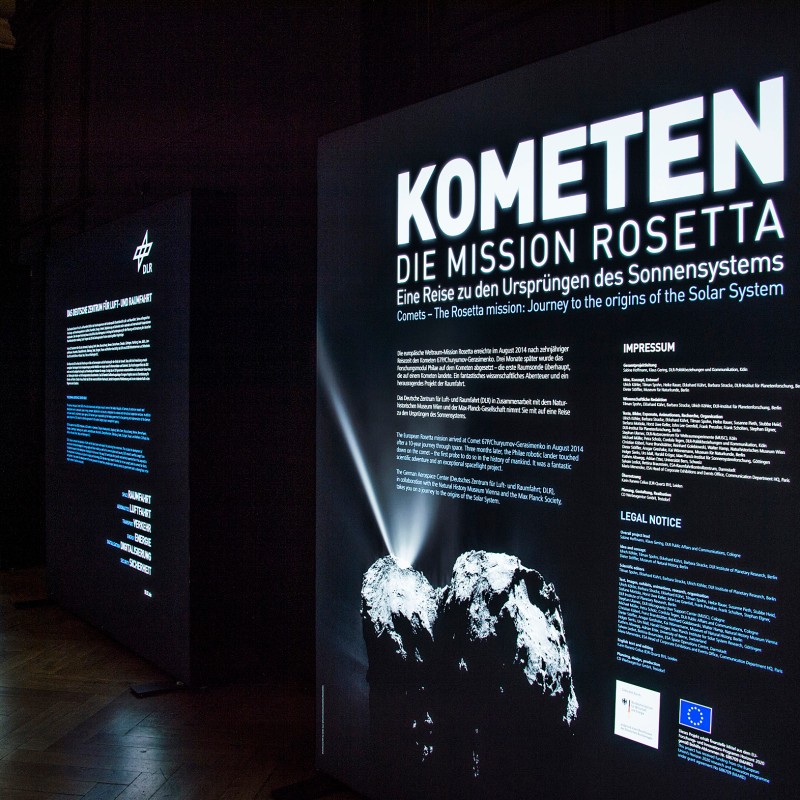 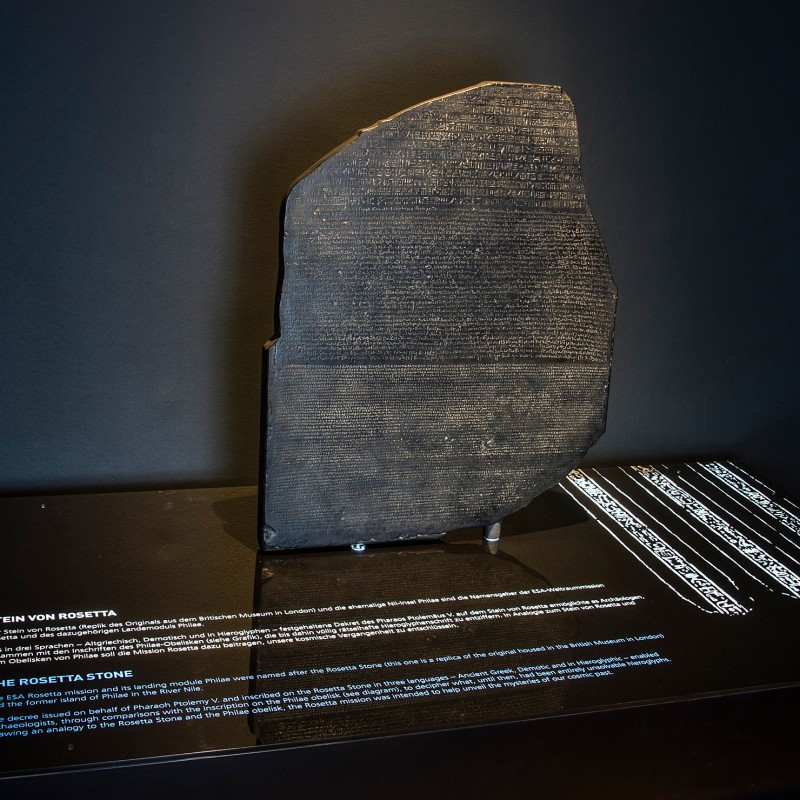 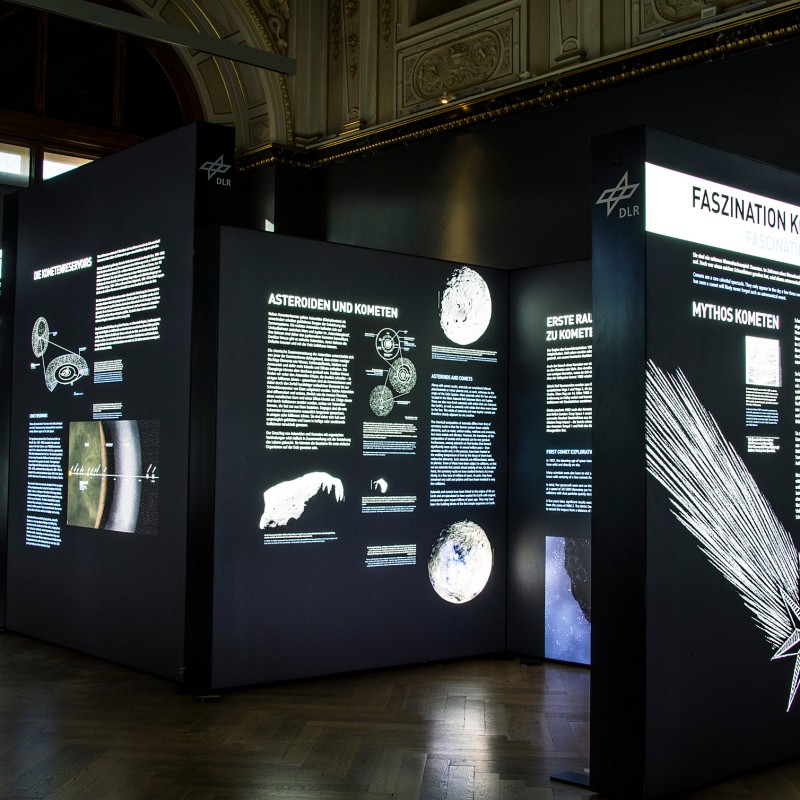 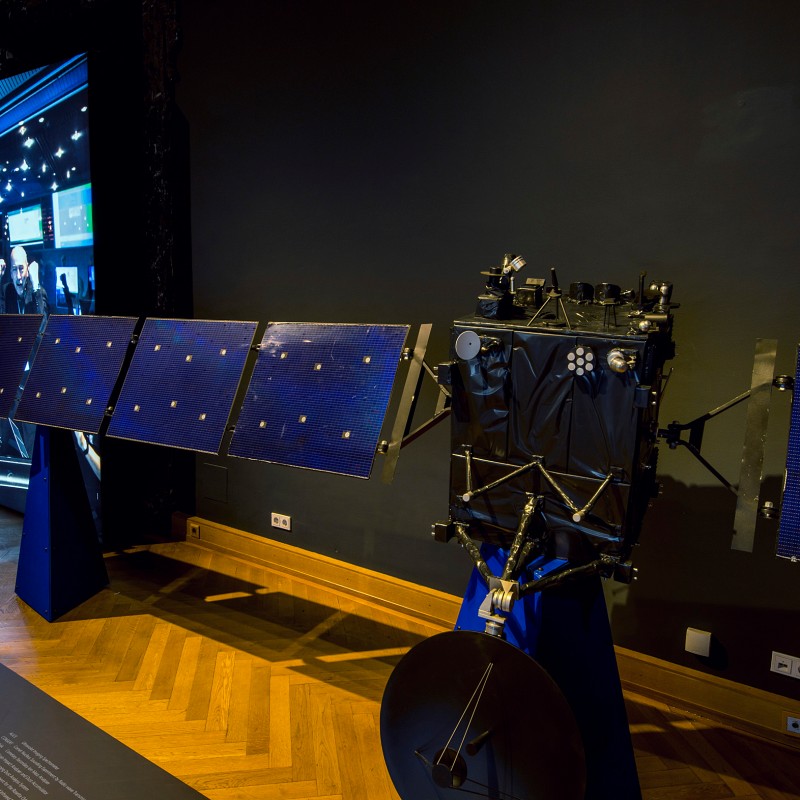 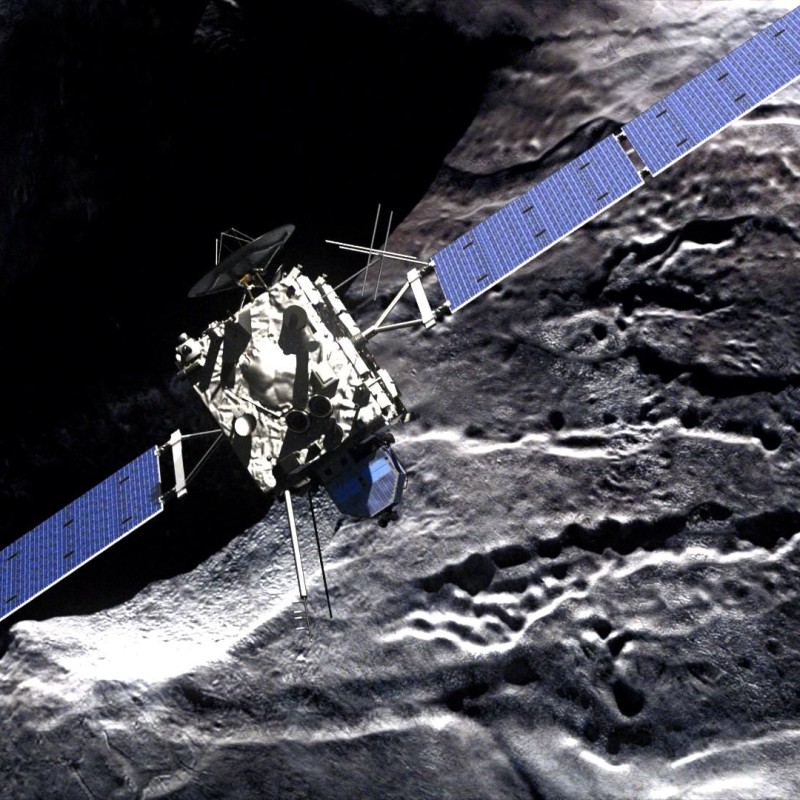 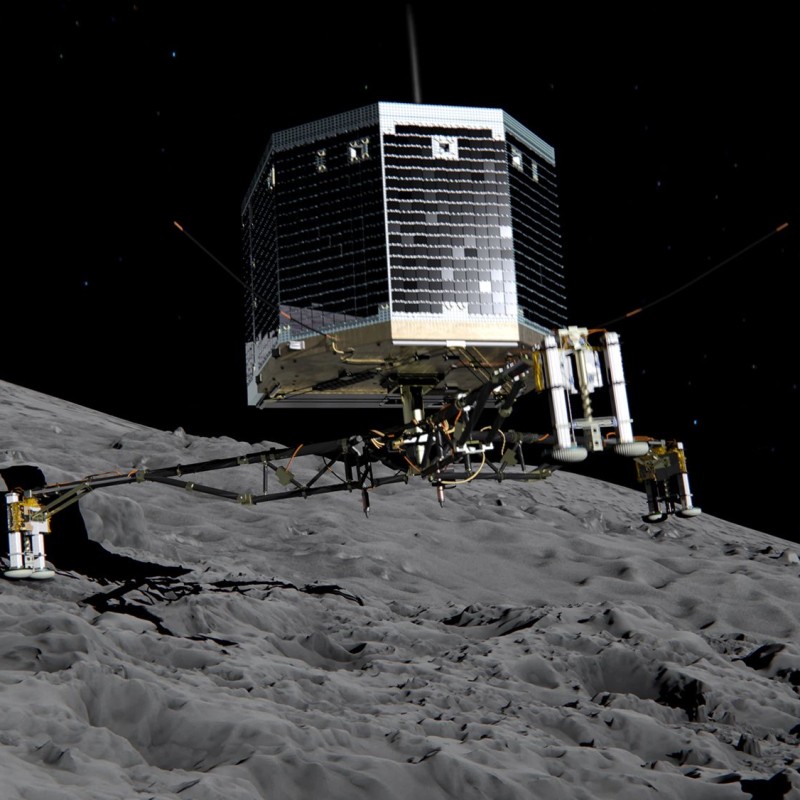