Compared to other cities, Vienna enjoys a very high diversity of wild bees. The reasons for this: the climate, the geographical location and a sufficiently large quantity of natural habitats. In the context of a current research project, researchers explore the site of the Breitenlee marshalling yard, which is home to rare species of wild bees.
To date, more than 450 species of wild bees have been identified in Vienna, which represents 66% of the total number of such species in Austria. The Breitenlee marshalling yard is a site that has not been hitherto at the centre of research relating to wild bee diversity. The site in Vienna’s 22nd district was to be home to a transport project that was started at the beginning of the 20th century and abandoned a short time later. Currently consisting of a contiguous area of dry grassland, copses and natural ponds, the roughly 90 hectare site represents the most important natural biotope in Vienna between Bisamberg and Lobau.

Supported by Arcotel Hotels, the research project of NHM researchers  Sabine Schoder, MSc.  and Dr. Dominique Zimmermann centres on the bees found in this area. The site is rich in wild bee species, including  several rare species:

Camptopoeum frontale, which is only known from the Pannonian region, is one of these very rare species. Only very few specimens of it have ever been recorded in Vienna. This bee needs the pollen of thistles and knapweeds (Carduoideae) to rear its offspring. It nests in barren or sparsely overgrown loess or sandy soils and requires a habitat that is dry and warm.

Another special species is Xylocopa iris, a small carpenter bee. While the other two carpenter bee species (Xylocopa violacea, the violet carpenter bee, and Xylocopa valga) are common and widespread in Austria and easy to find for nature lovers because of their considerable size, Xylocopa iris is much rarer. This is partly due to its special nesting requirements: it nests in tunnels that it gnaws into pith-filled or hollow plant stems. Cleared, intensively cultivated or particularly well-tended landscapes are detrimental to this species, as they offer insufficient nesting opportunities. All three carpenter bee species native to Austria are characterised by their iridescent black and blue body surface and wings.

Natural terrain is of particular importance for many wild bee species because it offers a variety of habitats that have otherwise become rare in our countryside. “Vegetation-free, open ground, dry and woody stems found in rarely mown meadows, or deadwood eaten by beetles serve as valuable nesting sites for different species, while the diversity of flowers on nutrient-poor soils provides pollen for food specialists among wild bees,” says Sabine Schoder, MSc., a member of the project team at the NHM. This makes areas such as abandoned railway stations veritable hotbeds of bee diversity, while they also serve as recreational areas for the population.

The documentation of special wild bee species at the Breitenlee marshalling yard recommends this area for long-term protection as a free urban wilderness, and it shows how important urban areas can be for the preservation of biodiversity. 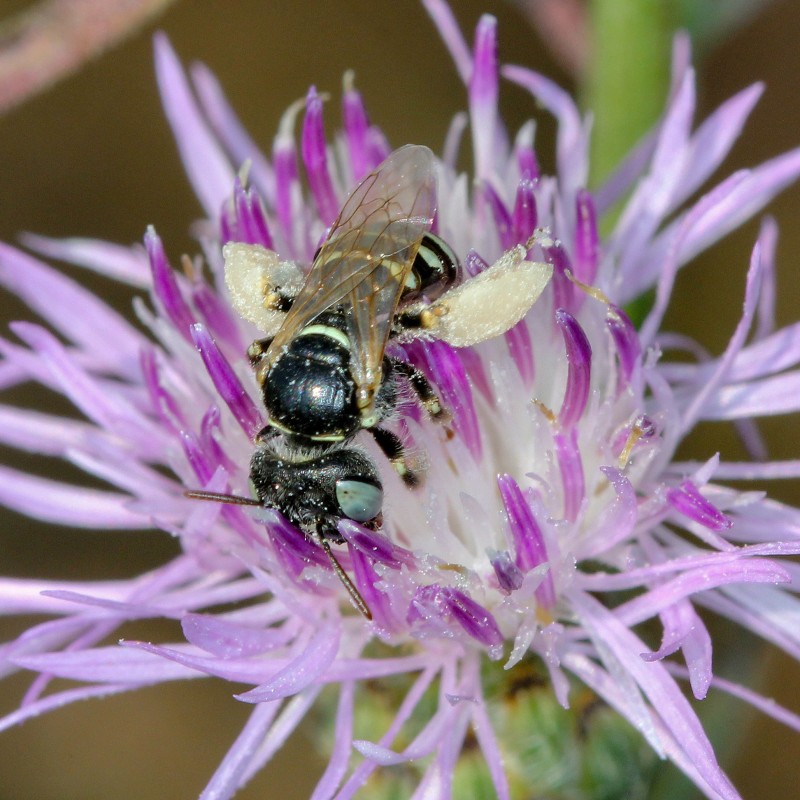