Coelacanth
Latimeria chalumnae. Comoro Islands. Acquisition, 1973 and 1974.
Their appearance and their status as “living fossils” make coelacanths much sought-after exhibition items. The NHM has two specimens – one skeleton and one complete mount.

No other fish has gained such high regard and caused as much excitement when it was discovered by Europeans as this one. This happened as recently as 1938, and it was Marjorie Courtenay-Latimer who made the find: “A beautiful fish lay before me – as if painted on china –  but I had absolutely no idea what species it might be. I only knew that it was valuable, very valuable,” she described the event years later. Preserving the fish became a challenge for the later namesake: heat, Christmas holidays, rejection by the morgue and the local cold storage house, too little formalin  The sensational find was at risk of going the way of all earthly things.
Even though the remains were scanty, fish specialist J.L.B. Smith realized that this was a “living fossil” – an ancient bony fish known to science until then only from 250 million year old fossils. Latimeria chalumnae is thought to be a close relative of the ancestors of tetrapods, because its pectoral and ventral fins are on a “stalk” and are reminiscent of legs. Compared to its body size, it not only has the smallest brain but also the most negligible energy needs of any living vertebrate. The fish, which grows up to two meters long, needs only 20 grams of food a day. Today it is threatened with extinction.
The NHM Vienna acquired the skeleton of a coelacanth in 1973, the only Latimeria skeleton in an exhibited collection. Mounting the specimen proved extremely difficult. The specimen preserved in alcohol was purchased in 1974, and since 2003 a diorama has conveyed an impression of coelacanths in their natural habitat.
Hall xxVi
Download all images 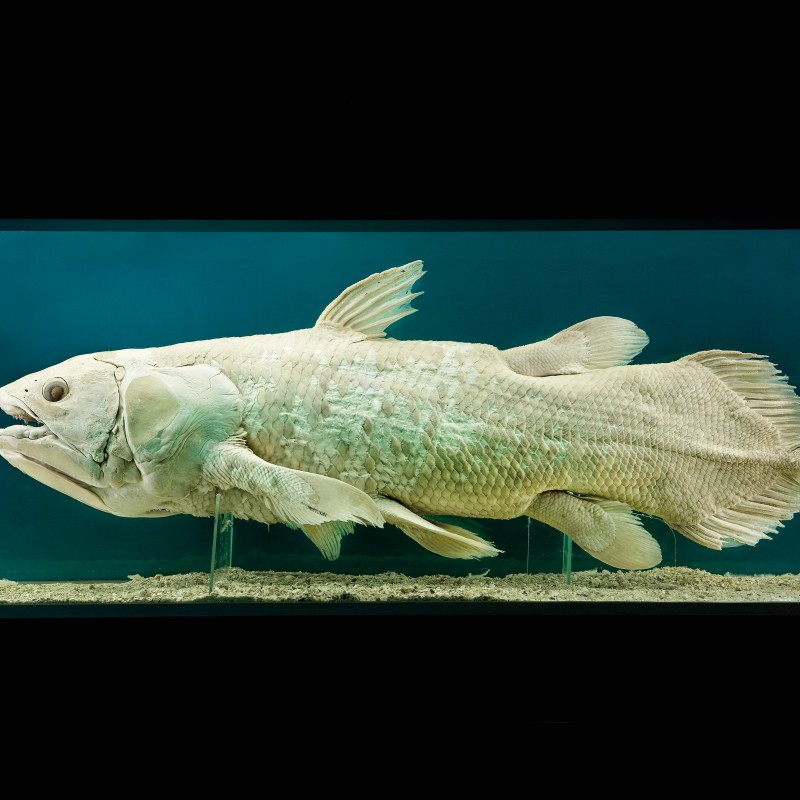