Gemstone bouquet
Height 50 cm. Frankfurt, Germany, and Vienna. Around 1760.
The baroque miniature gemstone collection – a gift from Maria Theresa to her husband – is unique both for the value of the stones and for their artistic workmanship.

A profusion of sparkling flowers and insects of the most precious materials: in 1997 a total of 2,102 diamonds and 761 colored precious and ornamental stones were counted in the gemstone bouquet. The vase is carved from rock crystal and the leaves made of pale green silk, unfortunately now badly faded.
Whilst it was still being made, even Goethe expressed his amazement at the gemstone bouquet in his book “Truth And Fiction Relating To My Life”: “Everybody knew that Emperor Franz cherished a strong liking for jewels, and especially for colored stones. Lautensack had expended a considerable sum, and, as it afterwards turned out, larger than his means, on such gems, out of which he had begun to shape a nosegay, in which every stone was to be tastefully disposed, according to its shape and color, and the whole form a work of art worthy to stand in the treasure vaults of an emperor.”
The floral bouquet, which weighs 2.8 kilograms and stands 50 centimeters high, was actually completed by the Viennese jeweller Michael Grosser around 1760. However, if we are to believe Goethe, it was the Frankfurt jeweller Johann Gottfried Lautensack who carried out the preliminary work on it.
In the year 1764 Maria Theresa allegedly had the gemstone bouquet placed in the mineral cabinet of her husband, Emperor Franz I. Stephan of Lorraine, as “a small name day surprise”. The empress encouraged her husband’s passion for mineralogy and mining as a means of promoting the economic growth of the empire. With the gemstone bouquet she laid the cornerstone of one of the Europe’s most traditional and valuable collections of precious and ornamental stones.
Hall IV
Download all images 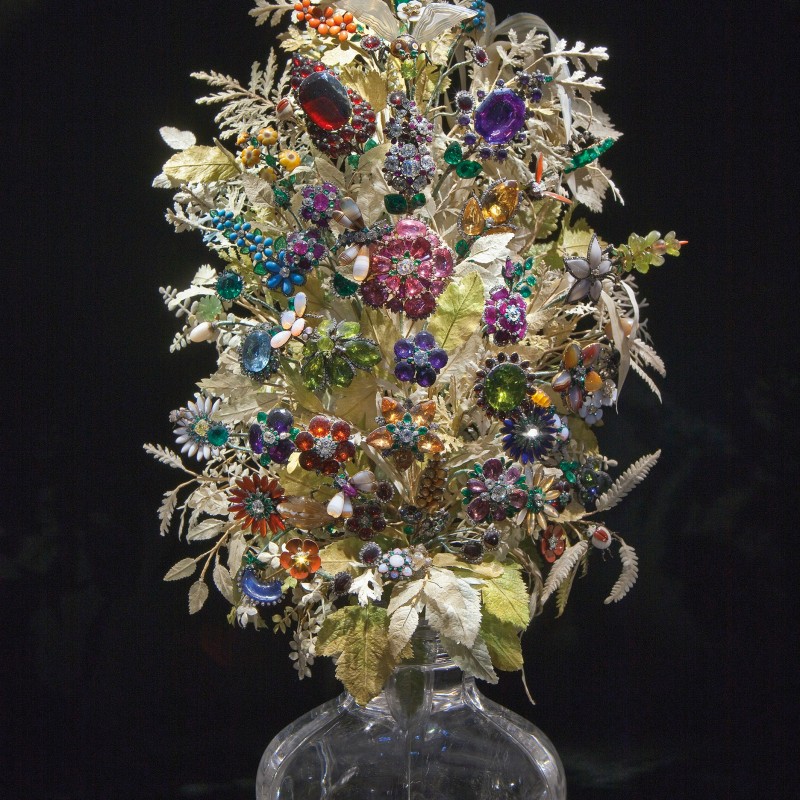