Thylacine
Thylacinus cynocephalus. Also Tasmanian tiger. Tasmania, Australia. 1870.
There are very few mounted specimens of this extinct species in the world today. The example at the NHM is one of the most beautiful.

In the past, the thylacine was Australia’s largest carnivorous marsupial. Long before European settlers arrived, it appears to have become extinct on the Australian mainland and survived only in Tasmania. Originally it inhabited open woodlands and grasslands; humans forced it into more and more dense forests.
There it hunted at night for small mammals, announcing its presence with its characteristic bark. Angry snarling and howling were other ways of communicating with fellow species. Like kangaroos, Tasmanian tigers could stand on their back legs, using their tail for balance. The female had a pouch with four teats, opening to the rear of the body. She produced two to four cubs in a litter. After three months, the cubs left the pouch but stayed with their mother for a year.

In Tasmania, thylacines were regarded as a threat to flocks of sheep and were aggressively hunted. As recently as 1930, the government offered a bounty for each animal killed. However, the thylacine’s reputation as a bloodthirsty hunter was completely unfounded. More recent scientific studies have shown that the thylacine could hardly have killed sheep because its jaws were not strong enough to do so. It was not until 1936 that the large dasyurid received legal protection; that same year, the last Tasmanian tiger died at Hobart Zoo in Tasmania. After his death, it turned out that “Benjamin”, who had always been taken for a male, was in fact a female.
All attempts to clone the animal failed.
Hall xxxiii
Download all images 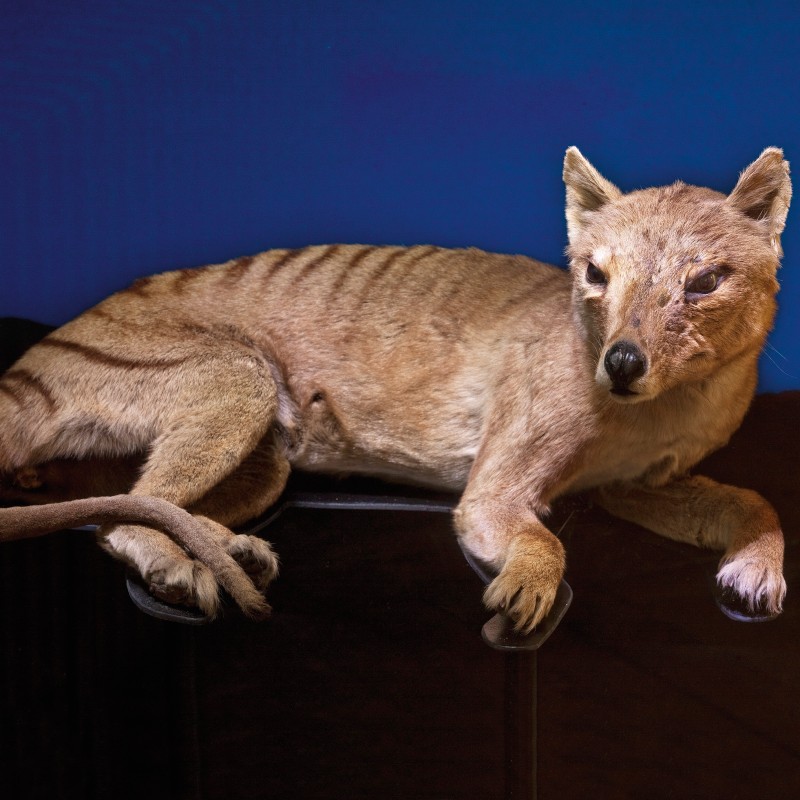